The Bacon Powered Pirate Core band known as Alestorm has released some Exciting news. They will be releasing a new album on August 1st called Sunset of the Golden Age. Here's the details below from the band's official page www.alestorm.net

- Keep your eyes peeled for this album on Amazon 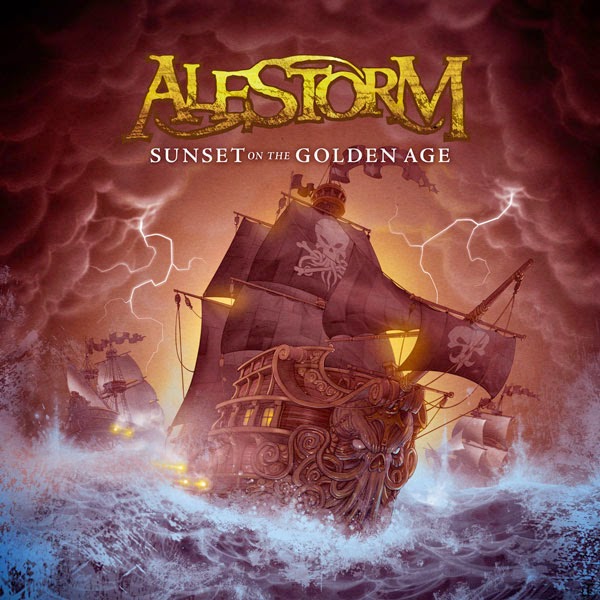 Ahoy there righteous dudes, babes, and all fans of Pirate Metal! It is my very great pleasure to tell you all that Alestorm's 4th album, to be entitled "Sunset on the Golden Age" will be released by Napalm Records on August 1st 2014! The tracklist for the album will be as follows:

Wow! Songtitles! Exclamation marks! We'll be telling you a bit more about the individual tracks sometime soon. What we will say for now, is that "Hangover" is a cover of the dance-pop anthem by Taio Cruz and Flo Rida. It works...trust me!

ANYWAY back to the good stuff. Check out the artwork for the album...how good is that? This rad painting was once again done by the very talented Ingo Römling, who has handled all of our previous album covers. It features a bunch of pirate ships doing what they do best: shooting the crap out of each other. Cannons are cool. Also, the sky is red, as if to imply it's sunset. See what we did there?

OF COURSE the title of the album is a reference to "The Golden Age of Piracy", which was a period roughly between the years 1680-1720 (depending on who you ask), during which time all the famous pirates you've probably heard of were doing their thing in the Caribbean. Stealing treasure, kicking the ass of the British Navy, plundering wenches, and so forth. Like all good things, this age had to come to an end, and so we've used that as a general theme for this album. There's also songs about drinking and partying too.

In the coming weeks and months we'll be giving you more details about the album, including preorder information, special editions, and other stuff...and we'll maybe let you all hear a song if you're good boys and girls! Until then, stay piratical!

Cheers
Chris - Alestorm
Posted by null at 9:29 AM

Right click and save file, then open in your media player.
http://listen.radionomy.com/hhr.m3u